Home American Jewish News Poway Synagogue Shooting: Brave Rabbi, Israeli Visitor & Several Others Injured After...
Share on Facebook
Tweet on Twitter
A shooting at a Chabad synagogue in Poway, near San Diego, California, has left one person dead and three injured, including a child.

NBC 7, a local television station, identified the shooter as John T. Earnest, a nursing student, in connection with the shooting on the last day of Passover. The shooter who left a “manifesto” prior to the morning attack said that he was inspired by the deadliest anti-Semitic attack in U.S. history, when an alleged white supremacist murdered 11 at a Pittsburgh synagogue. That attack happened exactly six months today.

Sheriff William Gore said in a news conference that the fatality was an adult woman, and the three injured were two adult males and one juvenile female.

A police spokesman said that a Customs and Border Patrol agent working off duty as a synagogue guard fired on the suspect as he fled the building, hitting his vehicle. The suspect called police and turned himself. Conflicting reports say that the shooter was shot in the stomach by the security guard who was an off-duty border patrol agent while others say he car was shot at while fleeing the synagogue after he was engaged in a gun battle.

Shortly after the gun battle, the shooter called police from a gas station to give himself up and when police arrived he was arrested without incident.

A 60-year-old woman, who was identified by a friend as Lori Gilbert-Kaye Z”L, was killed in the shooting. According to Palomar Hospital, the woman was rushed to the hospital after the shooting where she passed away.

Kaye reportedly jumped in front of Rabbi Mendel Goldstein to take the bullet and save his life.

Poway Mayor Steve Vaus told reporters that congregants had engaged and helped to stop the shooter, who apparently had anti-Semitic intent.

“I have heard that this was someone with hate in their heart, hate toward the Jewish community,” he said.

Vaus later added: “It was a hate crime,” an assessment he said was based on “statements that were made when the shooter entered.” He would not elaborate.

The brave Rabbi continued preaching the message of the Passover freedom holiday, even after being shot in the hand.

The founding rabbi of the Chabad of Poway synagogue — who has deep roots in Brooklyn — was taken to a local hospital and underwent surgery. Rabbi Goldstein has served as a Jewish chaplain for the San Diego sheriff’s department.

A doctor who spoke at a hospital news conference said the Rabbi’s injuries were most likely defensive wounds as he was trying to stop the shooter.

A second victim, 34-year-old Almog Peretz who was visiting from Israel, is also being described as a hero. A man who went to visit Peretz in the hospital says that Peretz scooped up many of the children in his arms and ran away from the shooter.

According to Palomar Hospital staff, Peretz received shrapnel injuries. He was visiting from Israel at the time of the shooting.

The shooter also shot a 8-year-old girl, Noya Dahan. She asked for her pictured to be shared and for everyone to know she is strong. Noya’s family moved to San Diego from the Israeli city of Sderot (San Diego’s sister city) to get away from the terrorism and the constant attacks on their community.

The shooting on the last day of Passover was

CNN quoted witnesses as saying that there were six or seven shots, and that the rabbi had two fingers blown off.

Trump spoke about the shooting at the rally Saturday night in Green Bay.

“Our entire nation mourns the loss of life, prays for the wounded and stands in solidarity with the Jewish community,” he said. “We forcefully condemn the evil of anti-Semitism, which must be defeated.” 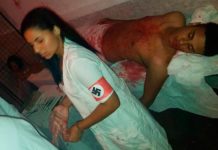 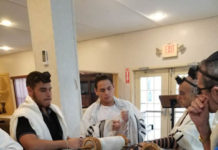 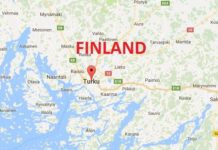 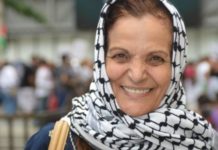 Steelers Donate $70,000 to Victims of Pittsburgh Synagogue Shooting Attack
Next