At the White House Rose Garden ceremony, Trump noted the attack on a synagogue in Pittsburgh last year.

“We will fight with all our strength and everything that we have in our bodies to defeat anti-Semitism, to end the attacks on the Jewish people and to conquer all forms of persecution, intolerance and hate,” Trump said.

“This morning we’re privileged to be in the presence of heroes who raced after the murderer and helped disrupt the attack at the Poway synagogue. Army veteran Oscar Stewart and Border Patrol agent Jonathan Morales,” Trump said.

Army veteran Oscar Stewart, who chased after the gunman, said the shooting calls for strength and unity across faiths.

Stewart charged the shooter without regard for his own safety, shouting “You motherf****! I’m going to kill you!” Police have credited him from preventing a blood bath as the shooter had additional ammunition and had not yet entered the synagogue sanctuary which was packed with men, women and children.

Upon hearing that, the gunman who was trying to clear a malfunction in his rifle to continue the shooting, started to flee from the synagogue to his car. Stewart continued to chase him and Morales arrived with a gun and told Stewart to get out of the way. Morales managed to at the suspect’s car as he drove away, who later called police and turned himself in saying that his car was riddled with bullet holes.

President Trump called on Stewart and Morales to share a few unscripted words.

Jonathan Morales, the off-duty border patrol agent who authorities said fired at the gunman as he left the synagogue, called for strength in acts of kindness and good in countering the evil found in the world and recalled the moment of confronting the gunman.

“We were attacked with our backs turned. You know, brave people stood up and confronted this person and we ended the situation, the best we could with the resources we had,” Morales said.

The President them called on Rabbi Yisroel Goldstein, who was shot in both hands in the attack, to speak. Goldstein called  the president a “Mensch par excellence” – a Yiddish term meaning a person of integrity and excellence — and credited him with helping him start to heal.

“Mr. President, when you called me, I was at home weeping. You were the first person who began my healing. You healed people in the worst of times and I’m so grateful for that,” Goldstein said.

He said many have asked him in the wake of the shooting: “Where do we go from here, how do we prevent this?” Goldstein suggested one step that could be taken would be to introduce a moment of silence in schools.

“When President Ronald Reagan was shot,” the rabbi said. “we needed to go back to the basics and introduce a moment of silence in all public schools so that, so that children from early childhood on could recognize that there’s more good to the world, that they are valuable, that there is accountability and every human being is created in God’s image. If something good can come out of this terrible, terrible, horrific event, let us bring back a moment of silence to our public-school system,” he said.

After Goldstein finished speaking, Trump complimented his “beautiful words” and said the rabbi had also told him that the greatest moment of his life was “to go from darkness to the White House.” 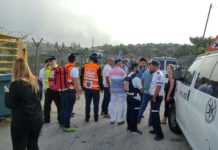 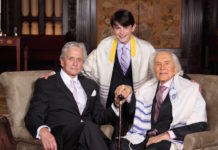 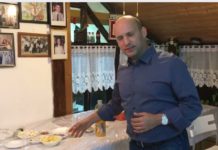 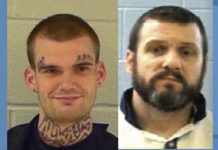