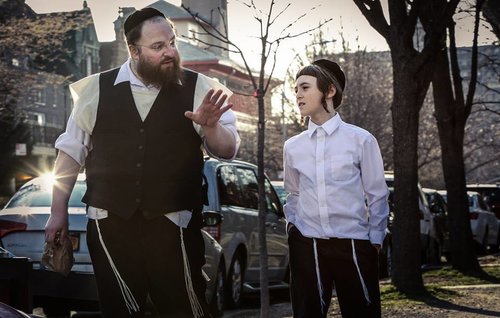 In “Menashe,” which debuts nationally July 28, director Joshua Weinstein has delicately crafted a work that emanates a rarely seen authenticity, tenderness and depth sadly lacking in other mainstream films about Hasidic Jews and their communities.

A Hasidic father named Menashe, who works long hours in a small grocery store in Brooklyn, struggling to make ends meet, has lost his young wife Lea to illness. Their sole child Rieven, an adolescent, has also become suddenly bereft of his beloved mother. Anchored against the resulting father-and-son relationship is Aizek, Menashe’s former brother-in-law and Rieven’s uncle, a successful but arrogant property owner who seeks custody of the boy to raise him in his own family.

This heart-wrenching triangulated scenario could play out anywhere. But this is Borough Park, home to numerous Hasidic groups, a world unknown—and also misunderstood and misjudged—by many. Filmed on location, this engrossing exploration of love, grief and devotion pulses to the heartbeat of the Hasidic community and its many nuances. In Menashe’s particular community, children must be brought up in a home with a mother, meaning that following his wife’s death, Menashe faces a choice between finding a wife or giving up his son, or violating the community’s tradition.

In the film, spoken almost entirely in Yiddish (with English subtitles), Weinstein sheds layer after layer, and reveals a profound humanity.

The real-life story of the unpretentious Menashe Lustig, who loosely portrays himself in the film, inspired this main character. Lustig is a grocer from New Square, N.Y. Except for Menashe’s Hispanic co-workers, all of the actors are Hasidim, most of whom have chosen to remain unnamed in the credits. Rieven is portrayed by a boy from London who was learning in an American yeshiva. The casting choices are instrumental to the film’s authenticity.

As Lea’s first yahrzeit (death anniversary) approaches, the conflict over custody heats up, framed by the swirling, towering flames of the night’s Lag B’Omer street bonfires, around which the Hasidim have gathered to celebrate, dance and sing.

Menashe is defiant that he can be responsible for his son, but the harder he tries to prove his worthiness, the more goes wrong, and the more rebuke and humiliation the principled Menashe is subjected to. We empathize.

Simple affection from Menashe’s adoring son provides him respite from all these pressures, while Rieven’s candor and innocence may be all the struggling Menashe needs to be able to reflect, and to become the father his son longs for.

Menashe’s humble walk-up apartment where Rieven, the Ruv (communal religious leader), Aizek and several other men have come to share in the yahrzeit meal, complete with “bachelor-proof kugel,” provides the setting for the dramatic climactic scene. Up close and personal, crisp editing masterfully evokes the tension—and high stakes—of this meal. With humor and drama, the community has its proudest moment.

From the brilliant opening scene of a dispute over the sale of a head of lettuce in the grocery store where Menashe is employed, to the faint sun’s rays illuminating the early morning netilas yadayim (ritual hand-washing) or a wordless sunset shared by father and son in the park, the camera’s deft touch pulls us into story after story. Weinstein calls these “micro-moments.”

“I think the whole film is like that….How does a small moment tell a big story?” the director tells JNS.org in a joint interview with the soft-spoken Lustig.

The many local characters emanate genuineness and a strong on-screen presence. Aware of the challenges Hasidim face today, Weinstein says he understands that when problems happen, “it’s so easy to leave…I wanted to make a character that by definition never even thought about leaving.”

Weinstein explains that the goal of Ruben Niborski, who plays Rieven, “wasn’t to be an actor…He was just a regular boy who was humble, polite and nice, and had no pretenses.”

Lustig and Niborski didn’t know each other when the filming began, so bridging that emotional distance within the film’s storyline comes across as real. Lustig exclaims, “I told [Weinstein] that if you put the clothes of my son on [Niborski], he looks like my son!…The child feels to me very close.”

Soulful music by Zusha, a New York-based Hasidic folk and jazz band, vitalizes “Menashe” with modern wordless niggunim (melodies). The searing melody of a solo violin, scored by Aaron Martin and Dag Rosenqvist, adds color and commentary throughout the film and heightens the mesmerizing closing scene.

When I ask how Weinstein chose the ending, Lustig doesn’t hesitate to chime in. “My answer is simple—that that’s a real story,” he says, “and the story will continue.” 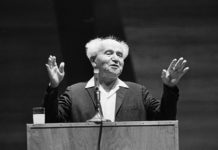 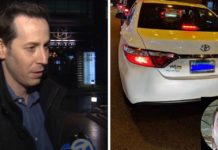 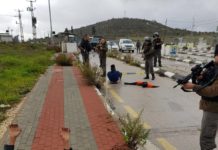