Rudd’s rejection of the London mayor’s request came in a letter penned in early September that was published for the first time this week by London’s Jewish Chronicle.

“The group that reportedly organized the parade, the Islamic Human Rights Commission, is not a proscribed terrorist organization,” wrote Rudd. “This means they can express their views and demonstrate, provided that they do so within the law.”

“The flag for the [Hezbollah] organization’s military wing is the same as the flag for its political wing,” said Rudd.

Therefore, in order for displaying Hezbollah flags to be considered a terror offense under British law, the “manner in which the flag is displayed” must specifically “demonstrate” that it supports the group’s military wing, she said.

Khan faced criticism in June over his hesitation to support designating all of Hezbollah as a terrorist organization, following the presence of Hezbollah flags at this year’s Al-Quds Day march. He later changed his position and called on the home secretary to blacklist the Lebanese group. The Board of Deputies of British Jews praised Khan for changing his stance.

The U.S., the Netherlands, France and Canada all designate Hezbollah—in its entirety—as a terrorist organization. But the U.K., like many other European nations, only considers Hezbollah’s “military wing” to be a terror group. 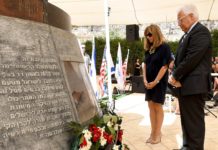