Home American Jewish News WATCH: ‘One of Our Attorneys Is a Jew’: Kayla Moore’s Proof That...
Share on Facebook
Tweet on Twitter
Roy Moore’s wife said she and her husband, who is running for the Senate in Alabama, could not be anti-Semitic because they employ a Jewish lawyer.

“Fake news will tell you that we don’t care for Jews,” Kayla Moore, her husband standing behind her, said Monday night at Moore’s final campaign rally in Midland City. “I tell you all this because I’ve seen it all so I just want to set the record straight while they’re here.” She waved at the media and grinned. “One of our attorneys is a Jew.”

She did not name the attorney.

“We have very close friends that are Jewish and are rabbis and we also fellowship with them,” she continued.

“Fellowship” used as a verb generally refers to Christians joining together. It’s not clear what Kayla Moore, who is a Baptist, meant in applying the term to encounters with Jews.

She also did not make clear what she was referring to when she said the media portrayed her and her husband as not caring for Jews, but the candidate came under fire last week for attacking liberal philanthropist and hedge fund manager George Soros, suggesting that he was headed for hell because he did not accept God’s salvation. Soros is Jewish.

Moore, the Republican candidate in the Alabama Senate race who is favored by President Donald Trump, is in an unexpectedly tight race with Doug Jones, a former prosecutor who is the Democratic candidate, in the special election Tuesday.

A former Alabama chief justice twice removed from the bench for defying federal rulings that countered his religious beliefs, Moore has been beset during this campaign by allegations that he wooed teenage girls when he was in his 30s. Two of his accusers have alleged that he sexually assaulted them, one of them describing an encounter she said took place when she was 14.

Moore’s candidacy is backed by Steve Bannon, a former top adviser to Trump who helms the Breitbart News website. Bannon, who remains close to Trump, spoke at the rally Monday night and appeared to take a shot at Trump’s daughter Ivanka, who said recently that she does not doubt Moore’s accusers, adding that there’s a “special place in hell” for child predators.

“There’s a special place in hell for Republicans who should know better,” said Bannon, who feuded during his White House tenure with Ivanka Trump and her husband, Jared Kushner, who are both top aides to Trump. 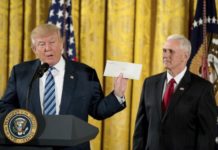