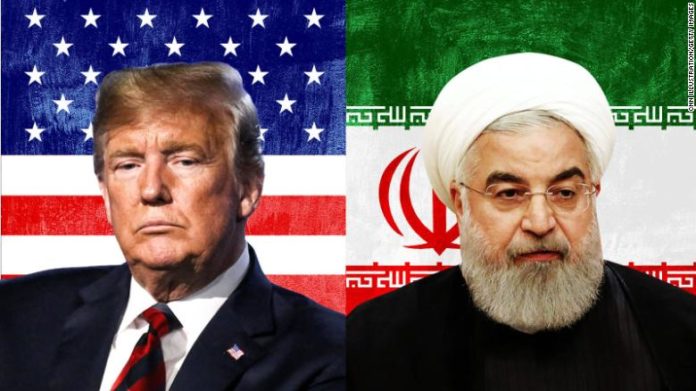 President Donald Trump said he was ready to meet with Iran’s leaders anytime with no preconditions, a pivot from his administration’s policy of encouraging “soft” regime change by isolating its ruling elites.

“No preconditions, no, they want to meet I’ll meet, anytime they want,” Trump said Monday at a press availability with Prime Minister Guisseppe Conte of Italy when asked if he would meet with Iran’s leaders. “It’s good for the country, good for them, good for us and good for the world.”

Trump maintained a tough line on Iran, again congratulating himself for pulling out of the 2015 nuclear deal, which traded sanctions relief for a rollback in Iran’s nuclear activity, and calling for other nations to reimpose sanctions.

“The brutal regime in Iran must never be allowed to possess a nuclear weapon – never,” Trump said. “We encourage all nations to pressure Iran to end the full range of its malign activities.”

But he ridiculed the notion that refusing to meet leaders of enemy states was an effective means of pressure, noting renewed talks with North Korea to end its nuclear weapons capability that ensued after he agreed to meet with its leader, Kim Jong Un, whom he once called “Little Rocket Man.”

“Speaking to other people, especially when you’re talking about potentials of war and death and famine and other things, you meet,” Trump said.

The president’s willingness to meet with the leaders of Iran is a sharp divergence from a policy of encouraging its people to rise up against those leaders. A week ago, Mike Pompeo, the U.S. secretary of state, delivered a speech directed at the Iranian people in which he asserted that Iran “is run by something that resembles the mafia more than a government.”

“While it is ultimately up to the Iranian people to determine the direction of their country, the United States, in the spirit of our own freedoms, will support the long-ignored voice of the Iranian people,” Pompeo said.

In the Q&A following his speech, Pompeo said that Trump is prepared to have a “conversation” with the leadership in Iran, “but not until such time as there are demonstrable, tangible, irreversible changes in the Iranian regime that I don’t see happening today.”

Israel has joined calls for regime change, with Israeli Prime Minister Benjamin Netanyahu posting on social media this week the tale of a fictional 15-year-old Iranian girl and the agonies she must endure just to live in Iran.

This is a tough story. But you need to hear it pic.twitter.com/vTpoKTrd2r

And Trump himself appeared to threaten war against Iran just last week in an all-caps tweet, responding to Iranian President Hassan Rouhani’s warning to the United States that war with Iran would have far-reaching consequences.

“NEVER, EVER THREATEN THE UNITED STATES AGAIN OR YOU WILL SUFFER CONSEQUENCES THE LIKES OF WHICH FEW THROUGHOUT HISTORY HAVE EVER SUFFERED BEFORE,” Trump wrote a week ago.

Within minutes of Trump’s news conference on Monday, Rep. Lee Zeldin, R-N.Y., who is Jewish and one of Trump’s most reliable backers in Congress, pushed back against any notion that Iran and the United States are peers.

“I have ZERO respect whatsoever for this Iranian regime, which will never be anything close to US equals,” Zeldin said. “They are not. They’re horrible people of worst kind with US blood on their hands; world’s largest state sponsor of terror & danger to all that’s good & humane in world.”